Adelaide Crows fans, thank you for your sheer, utter class.
Adelaide hasn’t really been a favorite for a Tigers fan since the South Australian team begrudgingly entered the Australian Football League in 1991.
The Crows had resiliently fought off the Victoria-dominated league until perennial South Australian powerhouse Port Adelaide made an attempt to enter the national league on its own. The rest of the state banded together and cobbled up the Crows, almost in spite.
South Australia thus fielded a virtual state team for several years, collecting a couple of premierships once they had settled in to the faster, more physically demanding style of play than the skill-centered game common in Adelaide.
What’s more, the South Australians resented the more powerful Victorians who dominated Australian football. It was common for the Croweaters to conduct campaigns to “Kick a Vic” back in the day.
Those days have long gone, but Adelaide remains a near-impenetrable fortress for the Crows, who invariably play every home match before a sellout crowd and remain a powerhouse. Crows fans were famous for the delightful practice of greeting opposition goals with absolute silence. 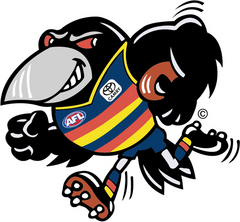 They entered the 2017 Grand Final as justifiable favorites, having been yards ahead of any other team throughout the season, and having finished as minor premiers.
What’s more, the Crows had overcome enormous adversity in recent years, including several tragic and untimely deaths, and problems of its own by being ineligible for the draft for having tried to cheat it, as well as several players leaving for better deals offered by other teams. But they had overcome all this, to be the favorites going into the game against the Tigers.
As a Tigers fan there was a lot to dislike Adelaide for. Adelaide’s greatest-ever winning margin was 139 points, which came in Round 16 of the 1993 season, against Richmond. The greatest number of goals a Crows player has kicked in a single game is 13, which Tony Modra achieved playing against the Tigers in the same game. Adelaide has flogged the Tiges plenty of times in its time in the league.
Yet, in spite of walking away defeated, Crows fans have showed Kangaeroo nothing but class.
Not a single Crows fan aware of Kangaeroo’s support for Richmond has reacted in anything other than a congratulatory manner. Many have made a point of coming over to congratulate. It was kind, moving and generous. It also changed my mind about the Crows.
Adelaide’s day will come again for sure. It’s an awesome club. I just hope that it’s next flag comes following Richmond’s establishment of a premiership dynasty. Or, even better, during a rebuilding year between dynasties! Carn the Crows!