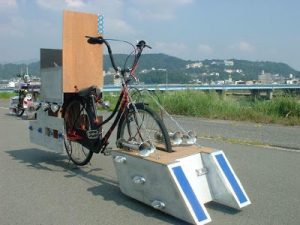 ong past their heyday, even in English-language coverage, dekochari, decorated bicycles, continue to survive in miniscule numbers even in today’s Japan.

Dekochari derived from the dekotora, decorated trucks, that became hugely popular throughout the archipelago in the 1970s on the back of the Torakku Yaro series of films, and which seem to be a symbol of Japan for some right through to this day.

Most of the dekochari are handmade by kids too young to get a license, and many are crafted by those aspiring to one day drive a dekotora. 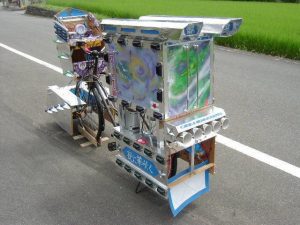 (Kangaeroo remembers plenty of dekotora on the roads in the late ’80s and early ’90s, but they are a rarity nowadays, at least in western and central Tokyo.)

Many of the dekochari aficionados are connected online at least, and pre-pandemic would sometimes take part in dekotora display shows.

There appears to be a market for dekochari merchandise anyway, with most online retailers catering to the hobby.

Dekochari are part of a much broader category of vehicle known as itasha: literally, cringeworthy cars. These are vehicles, mostly passenger cars, adorned with pictures of mostly favorite anime characters.

Itasha are hardly common, but are on the roads often enough to not be particularly noteworthy.

The ita of itasha is the adjectival form of itai, or painful, and refers to how the vehicles are painful to look at, painful on the wallet and painfully embarrassing.

Check out a gallery of dekochari accessible through links on this page.

Japan Has an Awesome Subculture of Gundam-Style Bikes

← So It Goes…
Beautifully Breaks the Tama River Morning →