Once upon a time, an Australian kangaroo commanded a dominant position on some of the world’s fiercest battlefields.
Before conjuring up images of warfare, thought, the fields being referenced were actually courts and the competition was for tennis.
Simpson was a brand started in Australia in 1937 and was known for its prominent display of a kangaroo logo. It would outfit the Australian Olympic team in 1948 and through Olympic Games in the 1950s. The brand was favored by the Australia Davis Cup team and tennis stars including winners of Grand Slam events such as John Newcombe, Tony Roche and Frank Sedgman.
By the 1970s, Simpson was a prominent brand for stars on the professional tennis and golf circuits.
Then, something went all awry.
The Simpson kangaroo lost its bounce. It fell from being a front line player to a minor figure in the ultra-competitive sporting apparel market, not only in its native Australian market, but throughout the world.

Japan, though, is an almost singular exception. Simpson is not a major sportswear brand in Japan, but it retains a connection with tennis and golf in particular.
Simpson Japan still issues new season’s fashions in Japan, keeping the kangaroo-branded sportswear in the market. 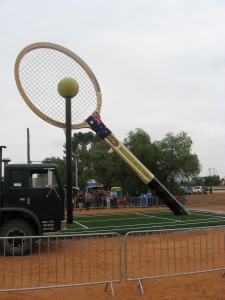 テニスをやる人は、lobの意味が良く分かっていると思うが、オージー英語では誰かがlobすると大きな迷惑になる場合がある。
Lobbing is an art form in tennis, and can be something similar in Strine, but with a much greater nuisance factor.