Macropod Music and Getting Sentimental Over Kangaroos in Japan 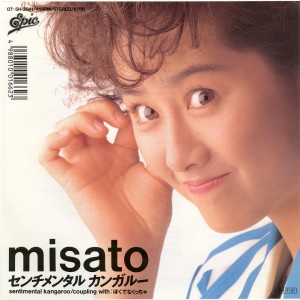 Kangaroos and koalas are among the symbols Japanese pop culture has, for many and various reasons, adopted at times (the latter with particular relish), and singer Misato Watanabe‘s choice of subject topic for her 1988 hit Sentimental Kangaroo proved a marsupial masterpiece.
Watanabe made her debut in 1986 with My Revolution, a huge hit that earned her a gold prize at the 28th Annual Japan Record Awards and would be the biggest-selling song of her career. Watanabe, whose heyday stemmed from the late ’80s to early ’90s, continues performing regularly today.
Sentimental Kangaroo was one of the attempts she made to match My Revolution, one of Japan’s most-covered songs of the past couple of decades and an early hit for its writer, Tetsuya Komuro, who would go on to become one of the most successful figures in Japanese entertainment history.
Sentimental Kangaroo scored a canned coffee ad for Watanabe, who appeared together with some animated marsupials bouncing through a sunflower field.