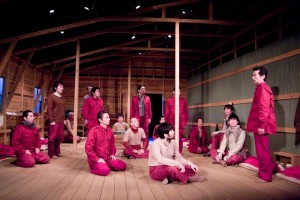 A scene from “Kaura no Hancho Kaigi” with Japanese POWs wearing the crimson uniforms they wore at the Cowra Prison Camp.

Kaura no Hancho Kaigi (Honchos’ Meeting in Cowra) superbly dramatizes events surrounding a definitive incident in Australia-Japan relations.
The play being performed by the Rinkogun theater group daily until March 24 (with two shows on March 19 and 21) centers on the Cowra Breakout, an attempted escape by about 550 Japanese prisoners of war being held in an Australian POW camp in August 1944.
Interwoven with the action surrounding the decision to rebel and attempt to escape or die trying by a group of men whose own homeland had effectively killed them by bureaucracy and cultural manipulation is a tale of a group of women making a film about the incident, but also containing a sub-plot of documenting the Fukushima nuclear disaster.
Overall, the result is a must-see for anyone with an interest in Australia-Japan relations, though it may not be exclusively pleasing and could raise discomforting issues that can sometimes be shoved under the carpet, prime of which is the fact that Australia and Japan were once at war and bitter, racially opposed enemies: a matter not commonly known in Japan. 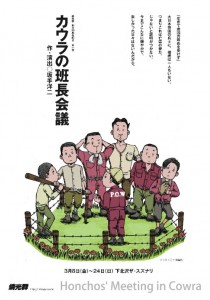 The play is also an unabashedly left-wing account of events, but this is also Kaura no Hancho Kaigi’s greatest strength as it humanizes the characters, notably the Imperial Japanese Army soldiers whose wartime culture depended on their dehumanization.
Playwright Yoji Sakate‘s script admirably addresses many serious issues, but perhaps too many, and sacrifices clarity at times in an apparent effort to ensure all sides have their views presented, but this foible is only a minor one.
Made for a Japanese audience, Kaura no Hancho Kaigi is essentially a Japanese-language play, but has large swathes of English (sometimes for mysterious reasons), much of which is delivered with deplorable Australian accents by American actors John Oglevee and Benjamin Beadsley, who redeemed themselves by breaking the fourth wall to apologize for their Strine deficiency.)
Nontheless, the somewhat surreal play had a bit of everything from action, humor, tragedy and drama, and is certainly worth seeing.

カウラの班長会議Kaura no Hancho Kaigi (Honchos’ Meeting in Cowra)
All seats reserved (prices range from 1,500 to 4,000 yen)
Showing until Sunday, March 24 at Shomokitazawa Za Suzunari
For inquiries or ticket sales, contact Rinkogun
(All inquiries should be made by a Japanese speaker)