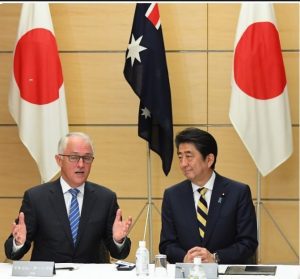 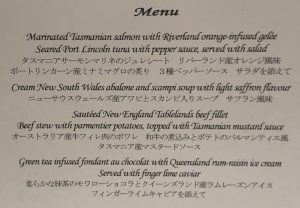 Shinzo Abe addresses the Australian Parliament at Parliament House, Canberra, on July 8, 2014. He was the first Japanese prime minister to address both house of parliament.

Shinzo Abe addresseｄ the Australian Parliament at Parliament House, Canberra, on July 8, 2014. He was the first Japanese prime minister to address both house of parliament. He gave a joint news conference with Australian Prime MInister Tony Abbott following the address.

オーストラリア総理大臣トニーアボットが豪訪問中の日本首相安倍晋三氏と晩餐会を行い、翌朝豪テレビ番組に出演し、二日酔いでからかわれることになった。
Australia’s perennially embarrassing British-born Prime Minister Tony Abbott turns up for a TV interview fairly hung over after a night on the booze with visiting Japanese Prime Minister Shinzo Abe.
アボット首相がかなり飲んだことを認めた。「責任を持った飲み方だった」というが、目がかなりやられているので、飲み方が責任を持って行ったかもしれないが全国放送で二日酔いに出演し、冗談を言うのはどうかなと思う。
If nothing else, at least the two countries seem to have decent relations.
ま、両国仲良しを喜ぶべきだろう。