Tets-J is one of the great unsung heroes promoting Australian culture in Japan, and he’s even more remarkable for advancing indigenous Aussie culture.
Tets-J learned about the didgeridoo while staying in Melbourne, taught himself how to play, then returned to Australia’s Arnhem Land and studied under Djalu Gurruwiwi, a master didgeridoo player and member of the Yolngu people.
He has devoted his life to spreading indigenous Australian culture throughout Japan, which he does through his performances, his store, Dinkum Japan, classes, lectures, workshops and live performances he gives across the country, as he is currently doing on weekends in Tokyo.
Aboriginal Cultural Week Vol. 2, the collection of lectures, workshops and live performances, has two final sessions remaining on Aug. 4 and Aug. 5 at the mont-bell Grandberry Mall store in Machida, on the outskirts of Tokyo. 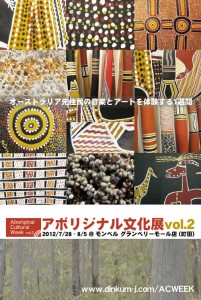 The workshops, which aim to give participants an opportunity to experience first-hand indigenous Australian culture and include the Aboriginal-influenced Tjangala Cafe in Ibaraki Prefecture among their supporters, include a gallery of photos and Aboriginal art, workshops on dot or bark paintings, boomerang or mini-didgeridoo decoration, a seminar on mainly Yolngu lifestyle, culture and customs and end with a night-time performance.
Items related to indigenous Australia are also on sale at the event. Performing at the concert on Aug. 4 with be didgeridoo players OMI and Tets-J, while the week will wrap up the following day with a show by Wago.jp (和豪.JP), a duo featuring tsugaru shamisen and didgeridoo.
As the week is directed toward a Japanese audience, events are conducted in Japanese. A small materials charge applies for some of the workshops, and advance reservations need to be made, while performers busk in their shows.
Tets-J is shown in the clip below, playing with Jibucon, in Minami Machida on July 29, 2012.