You Know You’re Australian If…

A decade or so ago, Sydney comedian Richard Glover wrote a fairly comprehensive list of typical Australian behaviors that is usually reprinted around this time of year, heading into Australia Day on January 26.

Kangaeroo joints the throng of reprinters by adding the list here.

You know you’re Australian if:

You know the meaning of the word “girt”.

You believe that stubbies can be either drunk or worn.

You understand that, should an Australian prime minister attempt to invent a nickname for himself, the nation would respond by choosing its own moniker, somewhat less flattering.

You believe the best-looking people in the world are those wearing the uniform of the Rural Fire Service, or its equivalent in other states.

Returning home from overseas, you expect to be brutally strip-searched by Customs just in case you’re trying to sneak in fruit.

You make a bong out of your garden hose rather than use it for something illegal such as watering a lawn.

You are alive to the debate over Australia Day, but accept the public holiday without question.

You understand that tough times create strong, resilient, loving communities but would now like a break from the constant fire, flood, drought and hail.

You believe that any DIY purchase must be accompanied by a sausage in a bun.

You were taught on your grandparents’ knee that “all the banks are bastards” and now have the proof.

You believe the best tourist attractions are housed within giant fibreglass prawns, bananas and sheep.

You bitterly criticise the media for its constant and intrusive stories about the British royal family, then find yourself reading every word about Harry and Meghan.

You believe the most patriotic way to vote at election time is while wearing a swimming costume.

You know the British feel superior to us – but find yourself increasingly perplexed as to why.

You pronounce Melbourne as “Mel-bin”.

You pronounce Penrith as “Pen-riff”.

You wonder when it was, exactly, that Australia’s politicians lost their sense of shame.

You can translate: “Dazza and Shazza played Acca Dacca on the way to Maccas.”

You understand that “Wagga Wagga” can be abbreviated to “Wagga” but “Woy Woy” can’t be called “Woy”.

You are welcoming of foreign visitors – but can’t wait to tell them about the Drop Bears.

You are staunch in your defence of Australian-owned enterprises but can’t resist buying truckloads of imported crap.

You call your best friend “a total bastard” but someone you really, truly despise is merely “a bit of a bastard”.

You wonder why, given the amount of cash thrown around at election time, none of it ever hits you.

When you hear that an American “roots for his team”, you wonder how often and with whom.

You believe it is appropriate to put a rubber in your son’s pencil case when he first attends school.

You believe it makes sense for a country to have a $1 coin that’s twice as big as its $2 coin.

Whatever your linguistic skills, you find yourself able to order takeaway food in every Asian language.

You believe that cooked-down axle-grease makes a good breakfast spread.

You believe all famous Kiwis are actually Australian, until they stuff up, at which point they revert to being Kiwis.

You know that certain vulgar words must, by law, be shouted during any rendition of the Angels’ song Am I Ever Gonna See Your Face Again.

You get choked up with emotion by the first verse of the national anthem, then have trouble remembering the second.

When you retire, your aim is to enjoy some “lifestyle” – an Australian word which roughly translates as “chardonnay”.

You understand that the phrase “a group of women wearing black thongs” refers to footwear and may be less alluring than it sounds.

You know, whatever the tourist books say, that no one says “cobber”.

You believe, as an article of faith, that every important discovery in the world was made by an Australian then sold off to the Yanks for a pittance.

You know that “you” has a plural and that it’s “youse”.

You’re proud of your country, but understand it can do a whole lot better.

You know what it’s like to swallow a fly, on occasion via your nose.

You will immediately forward this list to other Australians, here and overseas, realising that only they will understand. 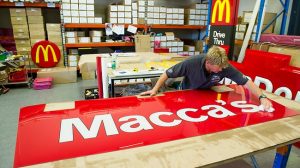 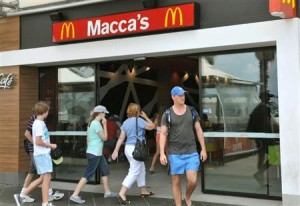 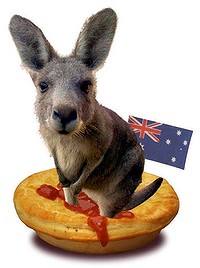